Where Do You Draw the Line?: An Ethics Simulation

What is “Where Do You Draw the Line?”

Where Do You Draw the Line? is a 50 minute, real time, face to face, structured experience. Participants are formed in groups and analyze a series of ethical situations. These are structured in a way to reveal the assumptions that each group uses to make ethical judgments. The set of situations is modular. The first module requires approximately 20 minutes, subsequent modules require approximately 10 minutes. All modules may be completed in one 50 minute session or in a series of sessions depending on your needs.

When talking about ethical issues there’s a tendency to view the problems and issues from the point of view of the ideal self. Consequently, the discussions quickly evolve into nice-nice talk in which the participants say “tsk tsk” and “ain’t it awful the way others behave?” The challenge in designing this exercise was to create a situation in which a more realistic and honest discussion would take place- one which was more like what the real self would do. To accomplish this task, we don’t ask the participants what they would do, but what “business people”, and the “man in the street” would do in a situation. This degree of distance encourages them to be more objective and more honest. And then once they’ve given these responses, the question becomes; to what extent does this apply to me as well? Most often this approach engenders a much more honest discussion than if we were to start out asking them directly what they think is ethical behavior for themselves.

Where Do You Draw the Line? is sold as a reusable kit.

Everything you need to run the exercise is included to run the program for up to 35 participants at a time. The materials are always available and usually ship the next business day of receiving the order. We prefer to ship via DHL or UPS and it usually takes between 2-5 working days to arrive in most parts of the world. Call us at 858 450-3400 or contact us online if you have any questions.

Customers Who’ve Use Where Do You Draw the Line?

What happens in Where Do You Draw the Line? 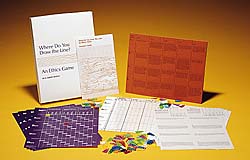 All The Materials Are Included To Run The Program

After being divided into groups, participants make judgments about the acceptability of the behavior of individuals, corporations and organizations as described in a series of vignettes. They then use their decisions as the basis for developing an ethical system. Some of the issues which are raised during the first phase include: What is the difference between a gratuity and a bribe? Is it the amount of money involved? Motivation? The effect on others? Is it acceptable to break a law if one’s actions make no practical difference? Is it more acceptable to “steal” from a stranger than a friend? From a rich person than a poor person? From a corporation than an individual?

In the second phase, the decisions of all the groups are summarized and displayed so all can see. At this time each group discovers that their vignette is slightly different from the vignettes used by the other groups. For example, Group B may be trying to decide whether it is acceptable to eat $10 worth of food while working as a clerk, while group C may be deciding whether it is acceptable to use an employer’s telephone to make an unauthorized long distance call worth $10, and yet another group, if it is acceptable for an employer to not correct a $10 error in their favor when paying an employee.

Who is it for?

Any course or training program concerned with ethics or values.

What is the unique feature of Where Do You Draw the Line?

Getting people to think and talk about ethics is not an easy task for most people. Consequently, people who are concerned about ethics often end up talking or lecturing to students who may or may not be interested. In other words, the lecturer does all the work.

With Where Do You Draw the Line? the participants often start out being blasé, but by the end of the experience they are eager to talk and share ideas. They do the thinking and the talking, not the teacher.

What does it teach?

How long does it take?

Where Do You Draw the Line? can easily be played in one fifty-minute session.

How many participants does Where Do You Draw the Line? accommodate?

How much preparation is required?

Five to fifteen minutes is all that is required, depending on one’s experience with education simulations.

Are any consumable forms or special equipment needed?

Power of Leadership teaches leaders how to use power to resolve conflicts, communicate effectively, solve problems, and manage positive change in the corporate culture. Learn More.

Pumping The Colors® team members understand at an intellectual and a visceral level what must be done to build a high performing team. Learn More.

StarPower® participants are eager to discuss the normally taboo topic of power and how it can be used to create trust and commitment instead of distrust, anger and apathy. Learn More.

BaFá BaFá® helps participants understand how culture affects each person’s behavior and what is required of each person to live or work with people who have different values, work styles, and world views. Learn More.

Where Do You Draw the Line?

Where Do You Draw the Line? helps participants understand the actual principles that most people use to make ethical decisions. We often customize this simulation to target specific ethical issues. Learn More.