The Creation of StarPower

In 1969 I was asked by the National Council of Social Studies to develop a simulation game to help students understand racism. They wanted me to introduce the new game at their national convention. I felt invincible in those days, so I agreed to do it in the short amount of time that was available to me. In my first attempt, I developed a scenario, based on an actual incident, in which a black high school student and a white student got in an argument over a supposed racial slur by the white student. The incident escalated into a food fight and then a punching, wrestling brawl that eventually involved many of the students in the cafeteria as well as several adults. During the brawl, windows were broken and property destroyed. It ended upon the arrival of several police cars.

In the simulation. the participants were told that they were at a meeting called by the principal  to discuss the incident and develop ways to prevent similar incidents in the future. The participants were given roles. One group was given the role of a white supremacist group, others a black power group, a moderate white group, a moderate black group and a group of teachers.

I tried the first version of the simulation with a group of professors and students from San Diego State University. The initial meeting in the simulation was called to order by the person assigned the role of principal. Before anything of substance could be said, one of the members of the black power group, a white professor, jumped up on a table and started yelling obscenities at the other groups. Remember, this was in 1970 and several cities were still smoldering from racial riots. The white supremacist group obliged by screaming racial insults at the black power group. The person in the role of principal tried to calm everyone down but the situation continued to escalate. When it became clear that the chaos was going to continue, we ended the simulation.

The discussion after the simulation consisted mostly of a rehash of what had happened and some discussion of the issues. During this discussion, it became clear to me that all of the participants in the simulation were not taking any responsibility for their actions. They were acting the way they thought their role demanded they act. Their statements were not something they believed they would normally say. The feelings, beliefs and attitudes they expressed were not feelings, beliefs and attitudes that they felt belonged to them. They were the perceived characteristics of the role they had assumed. In other words, they did not take ownership of their behavior. They felt no responsibility for anything they said or did in the simulation.

The participants thought it was a great experience. I, on the other hand, left the experience totally discouraged. I thought,  “this simulation isn’t helping people understand racism, it’s actually encouraging people to think in the most racist, negative, stereotyped terms.” 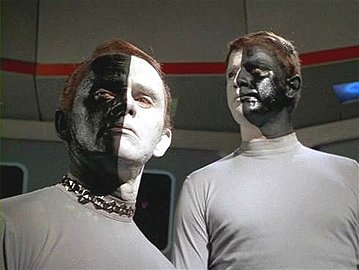 A short while later I saw Star Trek episode # 70: Let That Be Your Last Battlefield  which revolved around two groups of aliens that were beamed up to the Starship Enterprise. Some were all white on the left side of their bodies and all black on the other side. Members of the other group were just the reverse. As a viewer, I initially assumed that both groups were the same. I didn’t notice the left/right difference. Captain Kirk didn’t notice the difference in the beginning either.  As the story developed it turned out that the right siders hated the left siders and vice versa. At the end of the episode Captain Kirk returns the aliens to their home planet. To their chagrin, they discover that their civilization had been wiped out by racial fighting during their absence.

I thought it was brilliant because I believed it made the audience wonder if our own variation of racism isn’t as trivial and baseless as those in this episode.

Over the next while I tried to think of a way I could develop a simulation that would allow people to discuss racism in the same way that I thought that episode of Star Trek made possible. I called this new version Star Power because the inspiration for how to deal with racism came from the Star Trek television show. I used “power”because I believed the essence of racism is about power and powerlessness.

With that working hypotheses I tried to think of times when I felt powerless. One of the most vivid experiences occurred in a SIMSOC game run by Bill Gamson,  the author of the game. He came to La Jolla to run it with staff members of the Western Behavioral Sciences Institute of which I was a staff member.

We were divided into groups. I ended up in the Green Group with Bud Crow, the assistant director of the Institute, as well as others from the institute and a few friends of the Institute. During the first day we decided to take over all the other groups. We planned to do this by raising enough money to buy the police force. To ensure that no single person would have control of the society, we signed a document recorded on one of the message forms used in the simulation. The document our group wrote spelled out the conditions under which we would rule once we took control. It declared that every member of the Green Group had to agree to an order by placing his or her signature on any order given to the police before any major change could be instituted. The message form used in the simulation consisted of three pages with carbon paper in between each page so anything that one wrote on the top page was also written on the other two.  In this case, one copy was for the chief of police one for the group, and one used as an historical record for some research the institute was doing.

About midway into the second day we’d accumulated enough money to buy the police force by selling assets, pooling our private money, and scrimping on the services we paid for people in our part of the society. As part of our plotting, we wrote the directions to the police chief saying that we were buying control of the police force. As mentioned earlier, it declared that only orders signed by every member of the Green Group were legitimate. These directions were then signed by every member of the Green Group so our purchased police chief, the director Bill Gamson, would be able to recognize a legitimate order when it came from our group.

Because the members of the Green Group didn’t trust Bud Crow (that’s another story), they sent me with him to buy the police force. The two of us found the director. With me standing by his side, Bud gave him what I thought was the order signed by all of us in the Green Group. Bill took our money and the instructions.  Before he could make an announcement to the other groups, Bud gave him another order that said every member of the society was under house arrest including the people in the Green Group. The police chief started to follow Bud’s orders by making an announcement that the police force had been bought and everyone was under house arrest. I protested. “Read the instructions, it says every member of the Green Group must sign before an order is legal.” He showed me the instructions that Bud had given him. It did in fact say that only orders with the following signatures were legitimate, but there was only one signature, that of Bud Crow’s.

How did he do it? When we all signed the order to the police chief in the Green Group, Bud had slipped a piece of plain paper between the top sheet and the second sheet so that the carbon paper would record  his signature and no one else’s.

I was outraged. When I told the Green group how Bud had tricked us, they were also furious at Bud. We refused to obey the house arrest order and the simulation ended with everyone in the simulation either “rioting” or dropping out psychologically.

The difference between the “rioting” in SIMSOC and the rioting at the college was that we felt justified in rioting in SIMSOC. We weren’t playing a role, we were doing it because we felt cheated, angry and wanted revenge. Only after the simulation did someone from one of the other groups point out that the Green Group wasn’t so trustworthy either since we were trying to “steal” the police force and take over the entire society.

With these two experiences as inspiration, I proceeded to develop the current version of StarPower. In the first beta tests, we used large Fisher Price three dimensional plastic circles, squares and triangles to indicate group membership. These hung around the participants’ neck with a piece of brightly colored yarn. I worried that the brightly colored plastic symbols would mean that the participants would not take the experience seriously. My fears were allayed when I saw one of the Squares, the top group, shaking his plastic square in the face of a member of the Triangle group in a threatening manner and saying, “You’ll do it because I’m a Square that’s why.”

I had a phobia about flying in those days, so I did not run StarPower at the National Council of Social Studies convention in Chicago. Chris, from the North Carolina Advancement School, (I’ve forgotten her married name), ran it for me. She reported it was a great success at the convention.

It’s impossible to know how many people have been through StarPower, but the number of participants is certainly in the millions. Some people have run it hundreds of times. It’s very satisfying to know that so many people have experienced it and hopefully benefited from that experience, but the real fun was creating it.

Learn more about how StarPower works, what it does and who it's for on the main StarPower page for businesses and government agencies here and for schools and charitable organizations here.