Pumping The Colors: The Importance of Self-Coaching Team Meetings

If you are an external consultant or interested in re-selling this program please email or call us at 858 450-3400 for more details.

Pumping The Colors™ is an active, hands-on, team building/development simulation for a group (or groups) of five to ten participants. It challenges them to execute a complicated task under conditions that require them to perform as a team.

Why Team Training Is Important

Teams appear deceptively simple. All you do is get a group of people together, give them a task, and tell them to go at it. A fraction of the teams organized in this manner develop into high performing teams. Most of the remaining teams start out with great enthusiasm, then descend into an orbit of low performing mediocrity. Even when these teams fail or perform poorly, most team members believe that the team would have performed well if it weren't for one or two team members. That's a totally individualistic way of looking at a team: individual team members failed and thus the team failed. They don't understand that there's a high probability that if good team practices had been followed, those individual team members would have been high performing team members.

The Importance of Self-Coaching Team Meetings

The facilitator uses the self-coaching team meetings to:

If we accomplish nothing more than get teams to hold regular self-coaching team meetings in which they evaluate themselves against the Seven Practices of High Performing Teams presented in this program, or any standard that the team agrees upon, the team will greatly improve its performance. Increase

When regular team meetings are held in the workplace, the team members feel uncomfortable at first with the Seven Practices and do not know quite how to apply them to their work. But, after the first or second time, they begin thinking in terms of the Seven Practices and making mental notes such as, "We failed to follow through on the SPC problem, I need to bring that up at the next team meeting."

Objections You May Hear to Self-Coaching Team Meetings 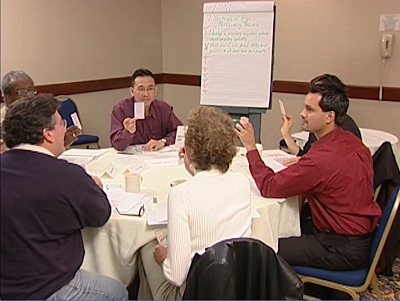 The most common objection to team meetings is that the team does not have sufficient time to meet. The excuse is always, "We're all under great pressure to get the project done on time." In reality, time is saved when team meetings that focus on team processes are held on a regular basis. Many teams go along seemingly doing fine until a problem develops; instead of confronting the problem and solving it, the team ignores it. Soon this silent problem begins creating distrust and frustration that spreads like a virus. When the frustration reaches a certain level, and the threshold is different for each team member, team members respond to the frustration in ways that are consistent with their preferred work style.

Team members who like to get things done quickly and efficiently often start taking corrective action without discussing the problems with other team members. Unfortunately, they may try to solve the wrong problem or more likely, they will try to solve the symptoms of the problem. The team members who prefer to get every detail perfect will start picking at the work that's already been accomplished. Those with a creative bent will start thinking of 17 different ways to solve the problem as they see it or will encourage the team to start over from scratch. These kinds of "corrective" processes take 10 times more energy, money and time than holding regular team meetings.

The reality is that many of us don't like team meetings because it goes against our individualistic nature. We would rather be focusing on the tasks, ideas, and thoughts that concern us not others. When we hold team meetings, time is often spent talking about issues and concerns that are not directly related to us as individuals but are relevant for the team as a whole. A person from an individualistic culture, often considers such discussions a waste of time.

Many teams operate as though the team will function without any attention to the team itself. "Just focus the team on getting the job done and everything will be fine."

Self-Coaching Team Meetings Are a Necessity

No one would think that putting oil in one's car is a waste of time even though it means taking the car out of service for awhile. The car owner knows that it takes time, effort and money to maintain the engine. The consequences of not changing the oil are dramatic - the engine burns up. Teams are like engines, they take time, energy and expense to keep them operating effectively.

Pumping The Colors creates innumerable teaching moments for high level concepts, ideas and values that are difficult to teach by more traditional means. It's real, it's powerful, it's taken seriously by all the participants and it gets results. We invite you to contact us to learn more and get started.